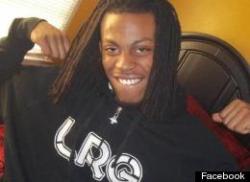 Carter 21 years old  suffered a single, fatal gunshot wound to the head after being detained on Last  Saturday night following a traffic stop in Jonesboro Arkansas, about 2 1/2 hours north of Little Rock, during Traffic stop. Officers said they found  marijuana and empty baggies then searched him twice, handcuffed him and placed him in the back of a police car. Not long after a “sudden” turn of events occurred , ending in Carter being discovered slumped over, with his head in his lap and a gunshot wound to the head. Police are saying  Carter retrieved a gun that he’d concealed, raised it to his head and pulled the trigger. A clear case of suicide, they said. The handcuffs, they said, were “double locked.”..

“Any given officer has missed something on a search, you know, be it drugs, be it knives, be it razor blades,” Sgt. Lyle Waterworth of the Jonesboro police told a local news station. “This instance, it happened to be a gun.”

His mother, Teresa Carter, disagrees. “I think they killed him,” she said. “My son wasn’t suicidal.”

Carter said she was also told her son was shot in the right temple, although he was left-handed. “I mean, I just want to know what really happened,” she told WREG-TV. “That’s all I want to know.”

The two officers who were present when Carter was found shot were placed on administrative leave.The FBI has launched an official investigation!

NOW WOW!….This is not adding up!..For One, when police search an individual it is very unlikely that you miss a GUN being found during a search! Then HOW IN THE WORLD would you justify a person being able to commit suicide while his hands being cuffed behind his back in a back seat of a police vehicle! And there is NO WAY he was left unattained while cops are surrounding his vehicle , there is almost always another officer watching the detained person!….COME ON NOW!!.We have Got to Do something as a community of people NOT only in our neighborhoods but PERIOD!………Story is still developing!……..Stay tuned #B.Michavery..