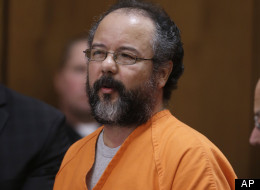 Serial Rapist and Kidnapper who was convicted on August 1, 2013 and sentenced to life in prison +1000 years after he pleaded guilty to 937 counts for holding captive and brutally raping several women for over a decade in his Cleveland home. Although During the sentencing Castro denied being ” violent” and or abusive” to the women,he did admit to holding them without their will and called the sex he had with these ladies consensual. ‘I’m not a violent person,” Castro said. “I simply kept them there without them being able to leave.” The women eventually escaped on may 4 of this year, when one managed to break down part of door and scream for help from neighbors. According to The Ohio department of corrections, Castro who was separated from other inmates for his own protection was found hung in his prison cell and later pronounced dead at Ohio State University Wexner Medical center.

How Horrific!! Its is unbelieveable the things people will do in this world! And to think he took the easy way out! My prayers are with the victims in hopes they find the help they will need to get past this horrible experience and some how find it in their hearts to move forward. perhaps this gave them closure, knowing the person who ruined their lives for over a decade, is no longer able to do this to other women or them. Or perhaps they feel some how he should still be suffering for all they have gone through. Either way i hope they find peace in their hearts and spirits and have the support they will most definitely need….Click the picture for New Footage.